All 3D visualization in MNE-CPP is realized within the Disp3D library, which is based on the Qt3D module. Qt3D is part of the Qt framework and actively developed by the KDAB group. The Qt3D module offers a layer on top of native OpenGL or Vulkan. It supports cross-platform compilation, is seamlessly integrated into the Qt framework and thus does not impose another external dependency on MNE-CPP. Qt3D utilizes a so called framegraph and scenegraph approach. The framegraph is a description of how to render. The scenegraph is a description of what to render and is represented by an Entity-Relationship-Model (ECM). In an ECM, entities describe general purpose objects, which aggregate so called components. These components are highly versatile and describe what the object is actually made of. In case of Qt3D, a component can, e.g., be a surface mesh, material, 3D transformation, etc. The framegraph includes information about different render stages and specifies what each render run is composed of. 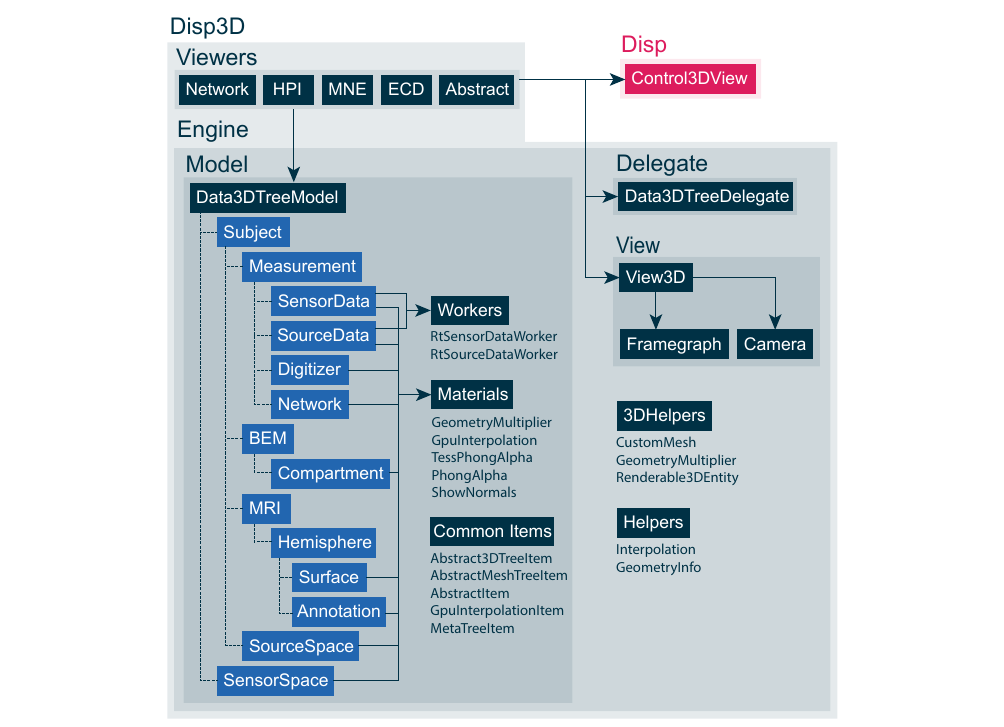 The above figure depicts a simplified version of the Disp3D architecture and components. Disp3D consists out of two main components: Viewers and an engine. The latter hosts the data model, delegate and view. The Framegraph and Camera are included in Disp3D’s view module and are both utilized by the View3D class. The Camera class provides the user to freely rotate the 3D scene.

Disp3D is backboned by its own tree (graph) based model Data3DTreeModel to store and organize data. The renderable tree model items inherit from the Renderable3DEntity class which itself inherits from Qt3D’s QEntity class. Hence, next to organizing Disp3D’s data, the Data3DTreeModel also serves as the scenegraph needed to render a 3D scene with Qt3D. Each tree item specializes in the visualization of a specific data type and includes parameters to change the visualization options on the fly during run-time.

Materials ensure the correct displaying and interpolation of data. The materials internally rely on graphics shaders written in GLSL, which are executed on the GPU. Five materials and corresponding shaders were implemented in order to visualize and interpolate data in real-time. Two workers were implemented to stream sensor and source-level data sample-wise to the corresponding tree items.

The Disp3D API is designed to minimize the user’s exposure to low level functionality. There are two ways the user can utilize Disp3D to visualize data. First, the user can work with viewers, which already include all necessary tools to visualize a specific data type. Viewers have the advantage that they are easier to setup and come with already implemented control parameters depending on the data type. Code snippet \ref{lst:methods:disp3d_viewers* presents how to visualize the connectivity results generated with Code Snippet \ref{lst:methods:connectivity}.

The Disp3D library supports several data types as input to its model and render pipeline. Next to functional data, Disp3D is able to visualize anatomical and other measurement related information. Some of the Data3DTreeModel items are solely used for organizational purposes, e.g., to group subjects, measurements or MRI reconstructed hemispheres, to name a few. Organizational items inherit from the AbstractTreeItem class, which again inherit from QStandardTreeItem}, see Figure \ref{fig:methods:disp3ditems}. They are therefore excluded from the scenegraph needed by Qt3D to render the 3D scene. All other items inherting from *Abstract3DTreeItem or AbstractMeshTreeItem class are included in Qt3D’s render process since they ultimately inherit, through the RenderableEntity class, from Qt3D’s QEntity class.

Basic geometric 3D primitives, such as sphere, cones, use the Abstract3DTreeItem functionalities. More complex 3D objects, such as surface meshes, use the AbstractMeshTreeItem functionalities. MetaTreeItem objects are used as children of a tree item, e.g., a FsSurfaceTreeItem}, to present additional information about the visualized data and to provide user input editors, e.g., color pickers for changing the surface color. *MetaTreeItem objects are described by types, which are parsed by the Data3DTreeDelegate to create the corresponding user input editors. 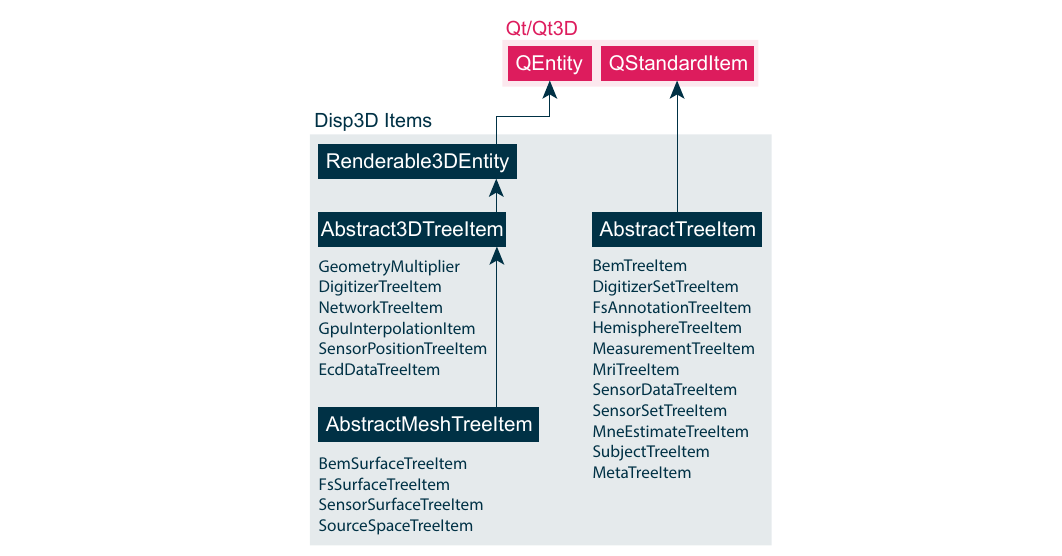 3D MRI Reconstructions and Annotations Surface reconstructions and annotations created with the Freesurfer toolbox can be visualized with Disp3D. The surface vertices, normals and triangulation data are passed to a FsSurfaceTreeItem object. Here, the data are used to create a CustomMesh object, which inherits from Qt3D’s QGeometryRenderer}. Next to the input data the *CustomMesh uses the PhongAlpha material to create a Phong lighting model with support for transparency (alpha channel). The annotation data are stored in a separate FsAnnotationTreeItem object, which colorizes the FsSurfaceTreeItem based on the color per patch information. Both, FsSurfaceTreeItem and FsAnnotationTreeItem}, are stored hemisphere-wise as children of the *MriTreeItem and MeasurementTreeItem classes.

Digitizer Data The locations of HPI coils, fiducial markers and additional head surface points can be visualized with the DigitizerTreeItem class. The data are colored based on their type (HPI, fiducial marker or additional point) and are visualized with the help of the GeometryMultiplier and Qt3D’s QSphereGeometry classes. The GeometryMultiplier facilitates so called instance rendering via the GeometryMultiplierMaterial}. Instead of sending the same 3D primitive mesh (QSphereGeometry}) to the GPU for every, e.g., additional head surface point, the mesh information (vertices, normals, triangles) is only send once. Instance rendering only needs the transformations in 3D space (translation and rotation) as well as the colors per instance in order to 3D render the full data set. This saves recurrent calls as well as data transfers from MNE to GPU and allows the efficient rendering of 3D scenes consisting out of a large amount of the same 3D primitive. All digitizer related items are grouped under the DigitizerSetTreeItem and MeasurementTreeItem classes.

M/EEG Sensors The M/EEG sensors are visualized via the GeometryMultiplier class as described above. In case of MEG, the helmet surface can be plotted with the help of the SensorSurfaceTreeItem class. All sensor information related items are grouped under the SensorSetTreeItem and MeasurementTreeItem class.

M/EEG Data M/EEG sensor level data can be visualized topographically on the 3D helmet surface or scalp BEM compartment, respectively. The SensorDataTreeItem holds a CustomMesh object with the helmet surface or scalp BEM data. The color values of the CustomMesh object correspond to the interpolated MEG or EEG data per sample. The real-time interpolation and visualization are described in more detail in Section \ref{sec:methods:disp3d:rtvis}. M/EEG sensor level data items are grouped under the MeasurementTreeItem class.

BEM Compartments The BemSurfaceTreeItem class visualizes BEM compartments. The internal rendering is done similar to the one described for 3D MRI reconstructions. BEM data items are grouped under the BemTreeItem class.

Source Space Model The source model created during the forward modeling can be visualized in 3D with the SourceSpaceTreeItem class. The input data can be passed in form of a forward solution defined by the MNESourceSpace class. The included surface is rendered similar to the one described for 3D MRI reconstructions. The modeled sources are rendered as spheres with QSphereGeometry and the GeometryMultiplier classes. Hence , the sources’ orientation are discarded for visualization purposes. Source space items are grouped under the HemisphereTreeItem and MeasurementTreeItem classes.

MNE Data
source-level data in form of \glspl{mne* can be visualized with the help of the MneTreeItem class. The class functions similar to the ones defined in SensorDataTreeItem}. The dipole orientations are not visualized, instead the MNE amplitudes are interpolated and plotted on a cortical surface reconstruction. The real-time interpolation and visualization is described in more detail in Section \ref{sec:methods:disp3d:rtvis}. source-level data items are grouped under the *MeasurementTreeItem class.

Equivalent Current Dipoles (ECDs) ECD data are visualized as 3D cones pointing in the dipole moment’s direction. The EcdDataTreeItem class uses the QConeGeometry and GeometryMultiplier classes in order to render the data. ECD data items are grouped under the MeasurementTreeItem class.

Functional Connectivity Networks Connectivity networks and their including nodes as well as edges are plotted via the NetworkTreeItem class. The edges can be colorized in respect to their weight and a prior defined color map. The diameters of the edges reflect the strength of their weights. The nodes can be colorized in respect to their degree and a prior defined color map. The diameter of the nodes is proportional to their degree, making it easy to spot hubs during visualization. The nodes are rendered as QSphereGeometry objects via instance rendering. The edges are rendered as QCylinderGeometry objects. In order to connect nodes with edges, a transformation matrix is computed which is passed to the edge instance rendering process in the GeometryMultiplier class. The transformation matrices translate, rotate and scale the cylinders (edges) to the position in between the two connecting nodes. The diameter of the cylinder is chosen to be small enough to not corrupt the visualization presented to the user. Network data items are grouped under the MeasurementTreeItem class.

The user can rotate the camera either via the arrow keys or the right mouse button. The camera can be translated via the middle mouse button. The left mouse button is reserved for the upcoming support for vertex picking. Furthermore, the user is able to change multiple parameters affecting the visualization and interpolation of the data during run time. The Control3DView class together with its QTreeView serve as user input interface. Each item in the Data3DTreeModel is presented in the QTreeView via the *Data3DTreeDelegate}. Some items hold extra information about the data and are non interactive. Others can be used to change parameters on the fly. The delegate provides the user with the appropriate editor. The table below gives a summary of which parameters the user can see and change in each item.