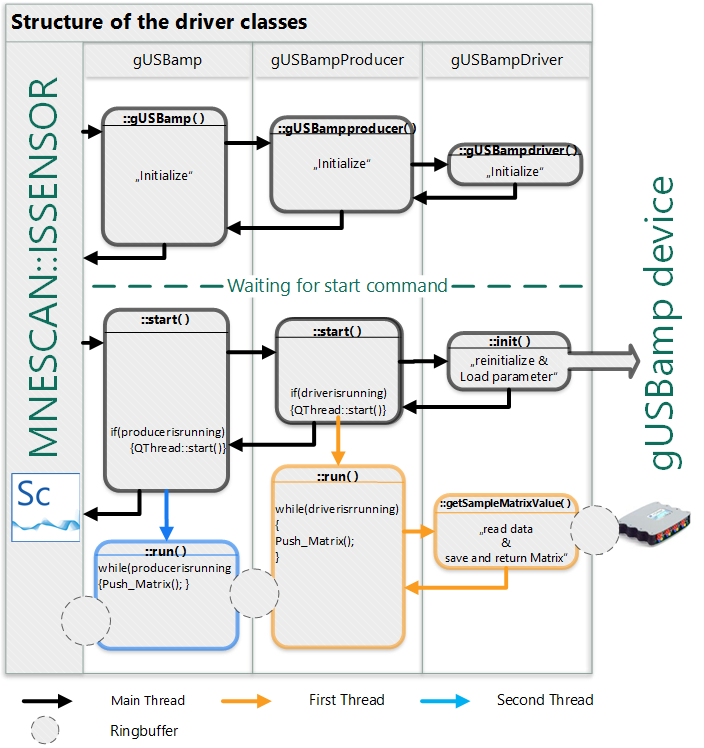 On the left side the border of MNE Scan can be seen, whereas on the right side the border to the actual device, in this case the gUSBamp amplifier, is depicted. In between, according to their hierarchical order, the three classes are shown as the interface between program and device:

However, gUSBampdriver is the actual class used to communicate and exchange data with the device. The gUSBamp and gUSBampproducer classes can be seen as a way, how to integrate the gUSBampdriver class properly into the project.

When establishing a new plugin to the plugin-box like shown in the gUSBAmp example, all three classes are initialized one after another by calling the constructors. During this process, all default parameter are generated. After that, the main thread returns to the program and the driver plugin is waiting for the start command or further changing instructions of the parameter by the GUI.

By starting the acquisition, one class invokes the next. At the end, the gUSBampdriver class initializes the device with the new parameters and sets the device status to “run”. After that, gUSBamp and gUSBampproducer class are each starting an internal thread which call repetitively for new data packages from the subordinate class and returning them to the overlying class until the data packages reach the MNE Scan environment. This is achieved with so called ring buffers and leads to a continuous data stream.

When stopping the acquisition, both threads are interrupted by putting the is_running parameter to false and the gUSBampdriver class puts the device into standby mode.