As already mentioned in the coding conventions, we require unit tests for newly added functionalities. The focus hereby lies on functional testing rather than 100% code coverage. Writing a test usually helps oneself to completely understand what you code is doing. Further, it is necessary for our CI-pipeline to provide tests and to ensure the stability of our software. Failing tests are the first indicator, that your function or change broke something in the project. This guide will show you how to write a test for your new functionality in MNE-CPP and what you should keep in mind.

What and How to Test 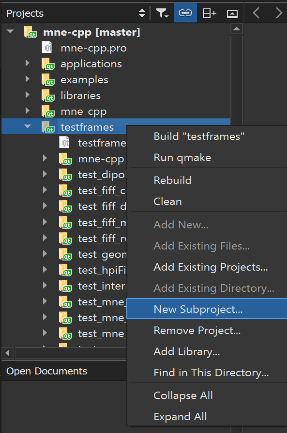 After this, a new window should open and allow you to choose from a variety of templates. Under Projects choose MNE-CPP and then MNE-CPP Test. After you completed all wizard steps you have created a new test project.

Always keep our Coding Conventions in mind. Consider taking a look at already available tests to get started. First, you create a class named after your test: TestName. The following code snippet shows an example for a test. The slots are defining the functions to execute your function initTestCase() and compare the output to reference values, e.g. compareValue(). Further, you can declare threshold values as private variables that indicate the difference which should not be exceeded when comapring. An example for a test can be found here.

Here you execute and declare everything that is necessary for setting up your test. You generate and load all values in a variable that can be compared to later. If you want to load external calculated data in e.g. .txt files you can use:

All files you use, have to be added to mne-cpp-test-data. In case you need to add new data open a Pull Request to this repository. The files you use should be as small as possible. If you need a .fif file, have a look at the already existing data first.

Here you compare the output of your functions to the reference data. The actual comparison is made by QVERIFY. Before the test, think about useful and meaningful measures and thresholds for your comparison. Don’t combine comparisons of different values, use a new compare function instead. Once you have build the test project, you should run your test locally and debug your test.

It might be possible that the last line of the test shows an error in your editor. Don’t worry about this, once you have built the test project, the error will disappear.

Please follow the following naming conventions when naming your test project and class: